We’ve been looking forward to this day for a long time.

Meet Boon. In order to start off on the right foot, we fed him a basket of bananas.

Boon gets a bath. 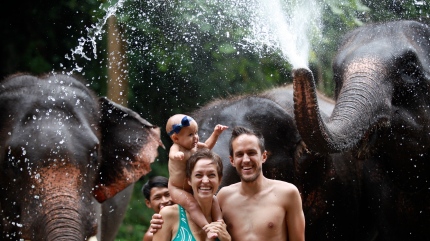 We get a bath.

Time to hop on.

Ty referred to himself as ‘Mowgli’. All day long. 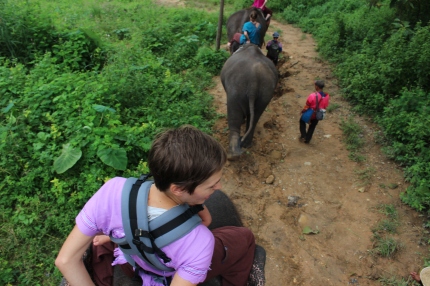 View from up top.

This little guy was 5 days old.

Mowgli enjoyed sitting together as a family. His wife did not. Story below.

No, we’re not falling. This is the dismount. As graceful as it could be.

A fun story: In this world we are all born with different talents. Riding elephants happens to be one of Ty’s.  Sloane was blessed with other talents, such as kindness, patience, and understanding. These talents did not prove beneficial during our elephant ride. As the saying goes, there must be opposition in all things. While Ty rode in peace and harmony with Boon, Sloane rode with moderate tension and anxiety. Nevertheless, Sloane was finally convinced to ride with her legs in front of Boon’s head (2nd to last picture) for a brief period of time. It was during this brief period that Boon went rogue and decided to tromp off the well-worn path, cross a stream and start eating the tall reeds on the other side. To Ty this wasn’t really a big deal, but then again, he wasn’t the one blessed with understanding. It turns out that  an elephant moves and twists his head in order to eat and break off the plant/reed/tree/branch/whatever.  This results in a lot of up and down, side to side, and twisting motions. According to Sloane, it is difficult to balance on top of an elephant’s head when this happens, especially with a baby acting as a mini-pendulum on your front. “It’s like an egg balancing on an egg!” While Sloane entered into panic mode, Mowgli remained calm as a cucumber and held them close with his small, but wiry right arm. After what seemed like an eternity (to Sloane), our guide took notice and called Boon back to fold. No humans were harmed. When asked if people do fall off their elephants, our guide simply responded, “some”.

The Elephant Experience:  We openly admit that we like elephants more than other animals. We’ve long admired and respected elephants, so we wanted to make sure our first experience with them was both meaningful and ethical. We went all out and chose the Patara Elephant conservation farm, the highest rated (and probably most expensive..) company. We made the right choice. This place was in the middle of the forest and the elephants just roamed free. No cages, no chains (the caretakers were sleeping every night with an expectant mother due any day). They call their program ‘Elephant Owner for a Day’, and they put you to work. The entire morning was spent learning about them, feeding them, and bathing them. Then we got to ride with them through the forest on their way to lunch. Obviously we were still tourists, but we felt less like spectators and more like caretakers. It was an unforgettable experience. Ok, off the soap box now.

A Few Elephant Facts  (based on what we remember)

1) Elephants sweat in only one place: right above their toe nails. Increased sweating is a sign of pregnancy.

2) They eat 10% of their body weight in fruits and greens daily. We were told Americans could learn a lesson from them. Touche.

3) The diagonal rocking back and forth motion (often in the zoo) is a sign of mental illness. These guys love walking several kilometers a day. If they don’t have enough space, they go crazy (imagine that).

You’re going to learn a lot about Chiang Mai over the next month.

Sloane immediately signed up for her long-awaited cooking class. 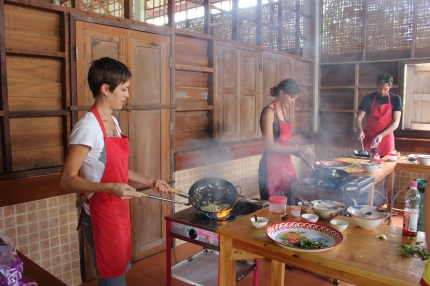 The results did not disappoint. 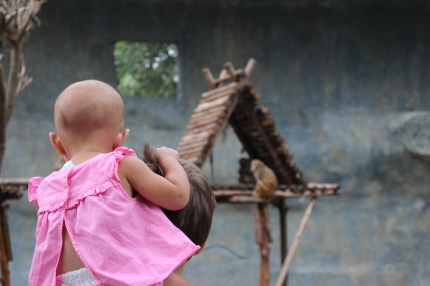 Fay’s first visit to the zoo. She loved all the different kinds of monkeys.

Still at the zoo. We loved the scenery as much as the animals. 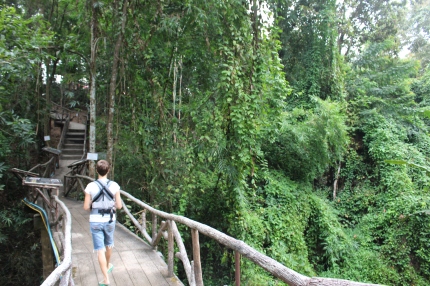 How to make your zoo awesome: just build it in the jungle. No landscaping required.

Stopped by Wat Phra Singh after church on Sunday.

Heading down from Wat Doi Suthep.  Favorite temple so far. Located up in the mountains, its surroundings are beautiful and the weather is nice and cool.

See you next week.

Arrival:  Chiang Mai is a great city to settle down in. It has a great vibe and culture, and tons of delicious food. There is plenty to do, plenty to learn, and plenty of interesting expats to talk to. After pounding the pavement for a few days, we found a great little apartment for $300/month. They even clean and bring us new towels and sheets every week.  We would go on and on about how much money we are going to save, but we’re probably going to end up spending it all on activities and tours. Chiang Mai will be home base until the end of November.

Thai Farm Cooking Class: Sloane LOVED the cooking class.  We started off by learning about the ingredients at a local market, then headed to the farm to pick out all our greens. Sloane learned to make Spring Rolls, Chicken w/ Basil, Mango Sticky Rice, Chicken Coconut Soup, and Green Curry, paste and all. Meanwhile, Ty was babysitter and photographer all day long.  Let’s not pretend Ty’s a saint or anything though, we all know he stands to benefit greatly from this experience.  We also lucked out, because our instructor, Pern, is now one of our best friends.  She’s shared all sorts of interesting information with us and she invited us over for dinner next week.  We are excited! A REAL Thai friend! She even invited us to stay at her apartment, but we respectfully declined.  She has no idea what Fay is capable of once the sun goes down.

Fay: Speaking of Fay, she’s still working on those teeth. She’s got 4 solid ones now, and 2 more trying to pop out. Lately, she’s been behaving really well during the day, and really not so well during the night. She is very good at getting the general public to fall in love with her.  As her physical development continues, so does the pain and stress associated with it.  She’s had some pretty big falls, but somehow confidence continues to grow. She also knows how to get exactly what we wants, whether it’s the undying attention of the locals, or leftover crumbs hiding under our table at the restaurant.

A Point of Friction: The current discussion in our household is how often to leave a diaper on Fay.  Due to the current climate and lesser quality diapers, Fay is more susceptible to diaper rash. She’s also refusing to do her little bathroom trick many of you know about. Lucky for Fay, Sloane is a very kind and caring parent. Fay is allowed to roam free throughout the apartment, resulting in multiple clean ups a day. Ty is less forgiving. He would rather deal with diaper rash than Fay’s excrement on the floor.